Not wearing work gloves has often been thought of as a sign of machismo, mostly by those who choose not to wear them. On the opposite side of the fence, work glove wearers aren’t thinking about how rugged they look, but how much easier life has been since they started wearing gloves. 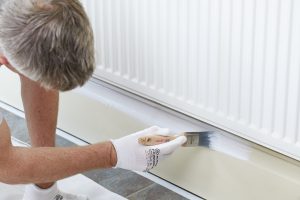 When it comes to decorators, far more wear painters’ work gloves than you may think. Decorators take immense pride in their work; it is their job to make the work of all the other trades look aesthetically pleasing, so it is almost unsurprising to learn many decorators care about their hands.

Now, some of the reasons are slightly unconventional, yet understandable. Speaking to a decorator at the Painting and Decorating Show he mentioned he was tired of getting paint on his favourite mug. Whilst this was undoubtedly a joke, it is no laughing matter. A tradesperson’s mug is a precious thing, their companion on many jobs, the only thing that’s stuck with them through many decorating hardships. And, let’s be honest, nobody wants paint to ruin a perfectly good brew. But if the same concept was be applied to more expensive possessions such as your phone or the steering wheel of your van it becomes a far more relatable issue. 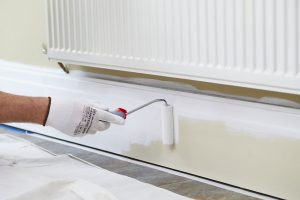 Wearing work gloves won’t stop your hands callusing, but it will prevent them getting covered in paint, which means you won’t need to spend ages scrubbing paint off your hands at the end of the day. Of course, you should still wash your hands after wearing gloves – that’s just basic hygiene – but you won’t need to use chemicals to get rid of stubborn paint. Scrubbing your hands each day with abrasive cleaners or – worse still – turps won’t be very good for your skin.

Prepping a home is arguably the most labour-intensive job and certainly the most important. Unless you’re using machinery, prep means hours of rubbing down and scraping which is certain to cause cuts, scrapes, and soreness at some point. Gloves are there to protect hands against injury and as a decorator couldn’t work without their hands it starts to seem faintly ridiculous not to wear painters’ work gloves to protect their hands.

On a similar note, issues such a skin conditions are an excellent reason to wear gloves – it really isn’t worth risking an allergy flaring up which slows you down or prevents you working.

The reason many decorators say they don’t wear gloves is due to lack of direct contact with the brush or roller, resulting in a feeling of less control over the work. As with anything, it takes time to get used to something new.